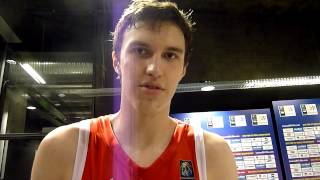 Strengths:
-Arguably the big man with the best feel for the game in Crete
-Tremendous passer. 5 assists per-40. Finds cutters flashing down the lane. Excellent in high-low situations
-Moves off the ball with great timing
-Can put ball down on floor from outside a bit and finish with a floater
-Can operate with back to the basket using crafty footwork
-Hits turnaround jumpers
-Crafty with his finishes around the basket
-Shows some potential as a floor spacer with feet set. Hit 36% of his 3-point attempts this past season against pro competition. Half of field goal attempts were 3s. Hit a handful of catch and shoot 3s at U19s
-Rebounds very well at junior level thanks to strong feel for game and intensity level
-Smart and competitive defender. Puts the effort in. Uses strength to advantage. Always gets a hand up on shooters.

Weaknesses:
-Lacks great physical tools. Not particularly quick or explosive. Heavy legged, and plays below the rim
-Has an old man's body which is not particularly toned
-Career 31% 3-point shooter through 160 games. Release point isn't consistent. Sometimes flings ball at basket or shoots from above the head
-Can't always gather himself for finishes off two legs when on the move.
-Major question marks about how his interior game and rebounding ability will translate to the senior level.
-Lacks the length and explosiveness to protect the rim
-Lacks the quickness to move his feet out on the perimeter and stay in front of quicker players

Outlook: Named to All-Tournament team after an extremely productive showing. Averaged 21 points, 14 rebounds, 5 assists and 2 steals per-40 minutes. Old school big man with a high skill-level, a great motor and an excellent basketball IQ. Already saw solid rotation minutes at a high level for Cedevita last season. Role will likely continue to grow this upcoming year. Will never wow scouts with his physical tools or upside, will need to win them over with his sheer productivity instead. Developing a consistent outside shot will be a major key in that.
Read full article

Strengths:
-Solid frame for age. Should fill out
-Very efficient offensive player
-Can score inside the post with smooth footwork and a jump-hook he shoots with either hand
-Shows range out to the 3-point line
-Great timing on the offensive glass
-Great fundamentals
-Tremendous feel for the game
-Excellent passer
-Team player

Outlook: Considered one of the top European prospects in the 1996 class. Son of Croatian national team 7-footer and Olympic silver medalist Franjo Arapovic. Appears to have been coached extremely well growing up, as he shows the maturity and fundamentals of a much older player. Does not show great athleticism at the moment, but is still in an early stage of his development physically.