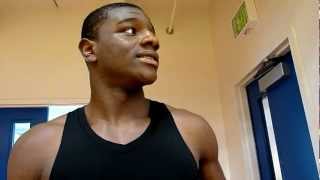 A consensus top-60 recruit in high school, Joel James's freshman and sophomore seasons were mostly a learning process as his current career bests of 2.2 points and 2.8 rebounds per-game indicate.

Listed at 6'10 with a long wingspan and a chiseled 280 frame he's improved significantly since he tipped the scales around 300-pounds in high school days, James has tremendous size for the center position. He plays with nice energy, and has decent mobility, but isn't overly explosive, and still has room to improve his frame, even if he already looks the part of a NBA center.

Skill-wise, James is very limited at this stage as evidenced by his 39% shooting from the field as the fifth option every time he steps on the floor. He frequently looks rushed offensively, even when he's in ideal position to score, and lacks the touch and explosiveness to be a factor in the scoring column.

Among players in our top-100, James ranks last in points per-40 minutes pace adjusted and next to last in field goal percentage, edging only Kentucky's Andrew Harrison. That being said, we've seen big men in his mold in the past make significant strides over time as scorers, which leaves some room for optimism that James can develop into a serviceable offensive player down the road.

What makes James an attractive long-term project is what his size and intensity allow him to bring to the table on the glass. James ranks third in our top-100 pulling down 13 rebounds per-40 minutes pace adjusted, doing an outstanding job staying active, finding players to box out, moving bodies, and generally throwing his weight around inside. Despite James's lack of offensive skills, his rebounding appears to be NBA caliber.

The same can be said of James's defensive presence at times. He's not a prolific shot blocker, but can often be disruptive both helping his teammates and defending one-on-one simply by going straight up and absorbing contact into his chest. The biggest obstacle for James on this end of the floor has been staying out of foul trouble. He gets caught with his hand in the cookie jar when trying to block shots, especially rotating over to the weakside, and is still developing the discipline to make a consistent impact on this end of the floor, but he has some terrific possessions defensively and could emerge as a rock solid interior defender down the line.

Like many young, raw big men, the best thing you can say about James at this stage is that he has potential, as he clearly has a long way to go offensively and overall considering he played just 8.1 minutes per-game last year. His per-minute footprint on the glass leaves room for optimism about his potential productivity, but he'll need to stay out of foul trouble and relish his opportunities this season if he's going to solidify himself as more of a prospect than a project. Either way, his sheer size makes him an intriguing player for the next level, and one worth keeping an eye on as North Carolina looks to build on an up-and-down season.
Read full article

Jonathan Givony
@DraftExpress
North Carolina commit Joel James isn't garnering anywhere near the attention that previous Tarheel big men recruits John Henson or James McAdoo did, but after watching him for the past two days here, it might not be unrealistic to expect him to have just as big an impact during his freshman season as they did.

Standing at least 6-10 with a chiseled 260 pound frame, James is ready to see minutes at the college level from day one from a physical standpoint at the minimum. His combination of size, strength, length and mobility will draw him looks from NBA scouts right out of the gate, and even if his skill-level is still very much a work in progress, the activity level he displayed leaves a lot of room for optimism regarding his future.

As James himself told us in the video below, he doesn't have any qualms about banging inside the paint and doing the dirty work, which is more than can be said for some of the big men here: