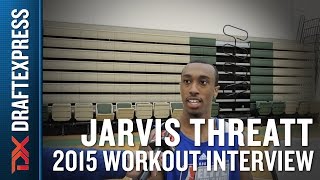 DraftExpress
@DraftExpress
Discussing a variety of topics with Jarvis Threatt at the 2015 D-League Elite Mini-Camp in Chicago, including the season he just had, his background, what type of player he is, and how he's looking forward toward the pre-draft process.

Threatt would have been a NCAA senior at Delaware this year, but instead played the season in the D-League after a very short stint in Greece. The 6-2, extremely athletic point guard put up gaudy per-minute stats in Rio Grande Valley's up-tempo system, averaging 22 points, 9 assists, 6.6 rebounds and 2.3 steals per-40 pace adjusted. He certainly helped his pro stock in the process, and is expected to get a number of NBA workouts now and likely a summer league invite.