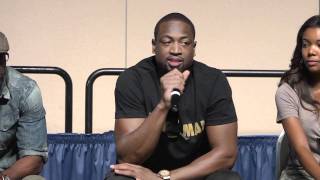 Matt Williams
@DraftExpress
Overview: One of the games best shooting guards due to his mixture of skill, athleticism, and unparalleled body control. A little short for a shooting guard, but compensates with a strong build and an incredible wingspan. Jumps out of the gym. Very hard to guard in many situations due to his first step. Floats and finishes with contact the way Michael Jordan used to. Durable in terms of his ability to take contact, but gets hit hard so often that it is hard to see him not missing some games. Shoots the ball pretty well from the perimeter, but doesnt take many threes. Does most of his damage at or around the rim. Finishes with both hands. Gets to the line consistently. Capable of setting up his teammates and running the point from time to time. Has a nice handle, but turns the ball over frequently due to his dominant ball-handling style of play. Rebounds relatively well. Does a solid job defensively when he wants to. Was ineligible as a freshman at Marquette, but blew up in his final two seasons there, leading his team to the Final Four. Won the Conference USA Player of the Year Award and Defensive Player of the Year Award as a junior. Needed a season to fully adjust to the NBA. Quickly became a superstar. Three time All-Star. Won an NBA Championship alongside Shaquille ONeal in 2006. Still on the rise as a player when healthy. 2007-2008 was largely a wash for him, so it will be interesting to see how he bounces back.

Offense: One of the most dangerous offensive players in the League even when he isnt at one hundred percent. Gets almost half of his offensive on the pick and roll, but also gets some one-on-one chances and some opportunities on the fast break. Makes a living by turning the corner. Doesnt have the tightest handle, but is a great ball handler. Will lose the ball at times on his drives to the rim, but usually is able to split the defense at explode to the rim. Loves to make spectacular layups in traffic. Has the best body control in the game. Will throw the ball in from angles that other players cant even imagine. Takes a ridiculous amount of hard fouls. Gets thrown to the ground more than probably any player in the League. Could save himself a lot of problems by developing a consistent floater. Displays nice form and consistency on his jumper, but doesnt have three point range quite yet. Shows tremendous footwork in the midrange. Knows how to get off shots when he is well defended. Incredibly confident, but not selfish in the least bit. Averages a ton of assists, and gets to the free throw line like a machine.

Defense: Plays tremendous defense when healthy and motivated. Will make game changing plays by reading passers and anticipating drives. Creates a lot of turnovers by being active with his hands. Makes some spectacular shots as a shot blocker. Doesnt always seem to give 100% on this end, likely to conserve energy. Rebounds at a solid rate, but isnt asked to crash the glass as hard as some of his teammates since he plays on the ball periodically. Will contest shots, maintain a solid stance, and defend with his feet rather than his hands.
Read full article