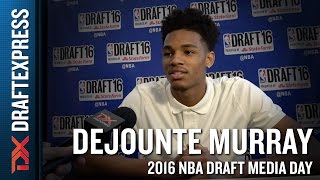 The 43rd ranked high school recruit in his class, Dejounte Murray exceeded expectations as a freshman, emerging as a second team All-Pac 12 Conference player after averaging 16 points, 6 rebounds and 4.5 assists per game. Washington did not have a great season overall, finishing 19-15 and 9-9 in conference play, with one of the youngest rosters in college basketball.

Murray took advantage of the opportunities he was presented with playing a major role for the fastest paced team in major-conference college basketball, and surprised somewhat by electing to enter the draft and hire an agent already in March, without testing the waters or even waiting on an evaluation from the NBA Draft underclassmen advisory committee.

Murray has good size for either guard position, measuring 6'5 in shoes with a 6'9 ½ wingspan. He has a thin frame, currently only listed at 170 pounds, but has fairly wide shoulders that indicate he should be able to fill out and get stronger in time. While not freakishly athletic in a traditional sense, Murray is a very fluid and slithery player, capable of playing above the rim in space, and knowing how to get to where he needs to on the floor thanks to his excellent instincts and pace.

Seeing a huge portion of his possessions in the open court, Murray is at his best pushing the ball in transition or in the early offense, where he shows a few different gears he can utilize to attack defenses. Although he's not particularly strong, Murray is an incredibly aggressive player, always looking for ways to get inside the paint and get a shot off, not being afraid of contact in the least bit. He shows some interesting ball-handling moves, with big swooping crossovers and fancy change of speed moves, mixing in terrific body control with instinctive footwork that allows him to execute some highly advanced scoring combos at times.

Lacking a degree of strength and explosiveness as a finisher around the basket, Murray is highly dependent on his floater to bail him out when he can't draw contact and get to the free throw line. He shows impressive touch and range on it, and made more floaters than any other draft prospect in the country this season according to Synergy Sports Technology, converting them at a decent 45% rate. There's a reason why more prospects don't take (or make) that many of those shots, though, as it's a very difficult way to make a living. Murray really struggles finishing in traffic otherwise, even in the open court, which is one of the reasons he shot just 46% from 2-point range.

While primary hunting for his own shot at all times seemingly, Murray will occasionally display some vision and creativity finding teammates for open looks, primarily off the dribble. He's turnover prone, often just passing as a last resort after exhausting all other options, and trying to get way too flashy at times, but does demonstrate some potential at times with his ability to hit the roll man, throw impressive lob passes, or whip the ball around in transition. As he gets older and the game slows down for him, he may be able to develop his point guard skills even further and learn how to run a team with a steadier hand.

Murray's biggest weakness offensively, besides his poor decision making skills, revolves around his very inconsistent jump-shot. He hit just 29% of his 3-pointers on the season, showing poor footwork and a lot of wasted motion in his release, having a difficult time in particular making shots off the dribble (15/59, 25%). This didn't prevent Murray from heaving up more than four jumpers per game, as defenses would often just sag off him completely, knowing they could bait him into settling for bad shots. The fact that he was able to make over one 3-pointer a game is a reflection of his instincts as a scorer and natural touch, which leaves some hope he can continue to develop this part of his game in time with better shot-selection and improved technique.

Defensively, Murray's long arms and excellent instincts give him some potential to grow into, but he was largely ineffective on this end of the floor as a freshman. He doesn't put much effort into this part of his game at this stage of his career, as he has poor fundamentals and isn't particularly attentive either. His lack of strength made it easy for players to bulldoze their way straight through him, he rarely gives a second effort after getting beat, and often looks very upright just standing straight up off the ball.

With that said, Murray shows quick hands and reaction time sniffing out passes and getting in the passing lanes (1.9 steals per-40 pace adjusted) and was one of the better rebounding guards in our Top-100 (6.3 per-40, 6th), which leaves some room for optimism that he can improve this part of his game over the next few years with better coaching and effort.

While some NBA teams likely would have preferred to see Murray return to school and gain more experience at the college level in what would have been a very talented Washington team next season, his family situation reportedly played a heavy role in him electing to declare early. Murray's size, length, creativity, scoring instincts, aggressive mentality and youth give him a nice framework to build off as a prospect, even if he's likely years away from helping a NBA team. A team looking to swing for the fences in the 20-40 range could very well elect to pick him and hope they can develop into a better player than you typically expect to find in that part of the draft, thanks to his talent-level. They'll have to be very patient, though.More DX Scouting Reports and Video Breakdowns:
-Baylor's Taurean Prince
-Michigan State's Denzel Valentine
-UNLV's Stephen Zimmerman
-Marquette's Henry Ellenson
-LSU's Ben Simmons
-Michigan's Caris LeVert
-Louisville's Damion Lee
-Florida State's Malik Beasley
-Florida's Dorian Finney-Smith
-Cibona's Ante Zizic
-Estudiantes' Juan Hernangomez
-Oakland's Kay Felder
Read full article